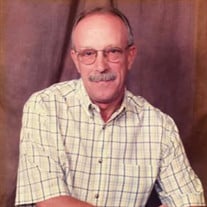 Ronald C. Everman Sr., 72, of Pooler, GA, (formerly Ashland, KY) passed peacefully on Saturday morning, September 25, 2021 at his home. Ron was born May 17, 1949 in Chicago, IL, to the late Clifford and Juanita Messer Everman. In addition to his parents, he was preceded in death by his beloved wife of 41 years, Pam, and their infant daughter Sandra Ann. Ron was a member of West Chatham Baptist Church, Pooler, Ga. He retired from Columbia Natural Resources and Operating Engineers Local 181 as a heavy equipment operator for both. Ron enjoyed spending weekends drag racing with his family and visiting with the many members of his extended racing family. Surviving Ron are his son, Ron C Everman Jr and his wife LynAnne of Virginia Beach, VA, his daughter Wendy Henry and her husband Sherm of Pooler, GA, a brother, Rick Everman of Canton, OH, and two sisters, Barbara Hall and Judy McReynolds of Mansfield, OH. Ron’s greatest joy was his three grandchildren, Justin, Brooklyn, Blake and two great grandchildren, Layla and Peyton. Funeral services for Ron will be held Friday, October 1, 2021 at Miller Funeral Home in Ashland. Visitation will be held from 11:00 AM to service time at 1:00 PM Friday at the funeral home. Following the service Interment will be at Rose Hill Burial Park, Ashland Ky Condolences may be offered at mfhfuneralhome.com. Arrangements are under the direction of Miller Funeral Home in Ashland.

The family of Ronald C. Everman Sr. created this Life Tributes page to make it easy to share your memories.

Send flowers to the Everman family.