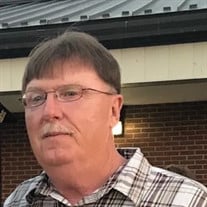 Robert E. “Bob” McComas, 61, of Catlettsburg, Ky. passed away suddenly, September 6, 2021 in Burnaugh, Kentucky. Bob was born December 23, 1959 in Ashland, Kentucky to the late Leslie and Era Doris McGuire. In addition to his parents, he was preceded in death by a sister, Theresa Clary. Bob was an Army Veteran, avid Deer hunter, fisherman, dog lover, and Trucker. He was also a member of the South Ashland Lions Club, and Poage Masonic Lodge#325 F&AM. He was the owner and operator of his own Truck leased to Usher Trucking in Louisville. Surviving him are his wife, Linda McComas of Catlettsburg, one son Ed (Audra) McComas of Russell, one daughter, Amy Chesney of Virginia, one brother, Leslie (Andrea) McGuire of Oregon, two sisters, Christina (Haskell) Orsbon of Florida, Susan (Kevin) Bryan of Lexington, and seven grandchildren, Leah McComas, Timothy (Carley) McComas, Amber Chesney, Chelsea Chesney, Jackson Chesney, Gabby Chesney, and Emma Chesney. At Bobs request there will be no services. Arrangements are under the direction of Miller Funeral Home in Ashland. Friends may offer condolences at www.mfhfuneralhome.com

The family of Robert E. "Bob" McComas created this Life Tributes page to make it easy to share your memories.

Send flowers to the McComas family.