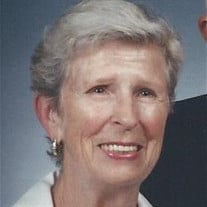 Phyllis Schumaker McKenzie 87 of Ashland KY, died Saturday December 6, 2014 at Woodland Oaks Health Care Center, after a long courageous battle with Alzheimer&#8217;s. She was born May 17, 1927 in Huntington WV the daughter of the late Donald... View Obituary & Service Information

The family of Phyllis McKenzie created this Life Tributes page to make it easy to share your memories.

Send flowers to the McKenzie family.