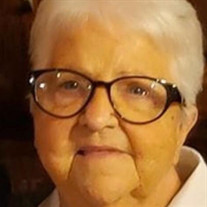 Madlyn Hunt, 86, of Ashland, went home to be with the Lord, Wednesday, March 18, 2020 at Kings Daughters Medical Center. She was born July 4, 1933 in Ashland, the daughter of the late George Oliver and Georgia Layne Thompson. She was a homemaker... View Obituary & Service Information

The family of Madlyn Hunt created this Life Tributes page to make it easy to share your memories.

Send flowers to the Hunt family.