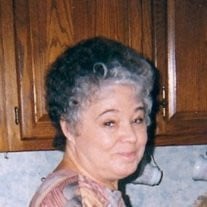 Lydia Jewel Hale, 75, of Ashland died Friday December 27, 2013 at her residence. She was born March 3, 1938 in Hitchins, KY the daughter of the late John and Alia Jane Seagraves Helms. She worked in the state employment office and was a member... View Obituary & Service Information

The family of Lydia Jewel Hale created this Life Tributes page to make it easy to share your memories.

Send flowers to the Hale family.