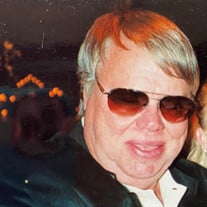 Lonnie Castle, age 76, died on December 2, 2020, after a series of illnesses. Lonnie was the devoted son of the late Edward and Arthie Castle of Ashland, Ky., and soulmate/partner of the late Diana Atkins Duty. He was the proud father of Lona Castle of Rancho Cucamonga, Calif., and Stephanie Ritchie of Park City, Utah. Additionally, he is survived by his two sisters - Catherine Castle of Cincinnati, Ohio, and Carolyn Castle of Berea, Ky.; special friends/cousins, Don and Nellie Sublett, and five grandchildren. Lonnie graduated from Ashland High School, Class of 1962, and obtained a bachelor’s degree and a master’s degree from Morehead State University. He was a very proud U. S. Army veteran – a Vietnam era vet who served his country in Taiwan and Vietnam and was a disabled veteran as a result of that service. He was also a retiree of the Commonwealth of Kentucky, working over 25 years in the Division of Water Quality as a supervisor in the Morehead, Kentucky, office. Besides his children and grandchildren, Lonnie’s legacy is one of optimism and resilience – one of determination and perseverance. Having gone blind as a result of retinitis pigmentosa in his 40s, he accepted the hand that Fate dealt him and, quite literally, never looked back. His positive attitude was truly remarkable, as was his enduring sense of humor. He was a serious UK Wildcats fan and he also was a serious student of thoroughbred racing, continuing his winning streak at Keeneland long after he lost his vision. As he once told the teller at the betting window, “This game is so easy, even a blind man can win!” Because of the pandemic, there will be no funeral service; however, a memorial will take place at a later date. Lonnie will be laid to rest in the Ashland Cemetery on Monday, Dec. 7. Full military honors will take place for this heroic Army veteran at the cemetery and will be provided by the Kenova American Legion Post 93.

Lonnie Castle, age 76, died on December 2, 2020, after a series of illnesses. Lonnie was the devoted son of the late Edward and Arthie Castle of Ashland, Ky., and soulmate/partner of the late Diana Atkins Duty. He was the proud father of... View Obituary & Service Information

The family of Lonnie Castle created this Life Tributes page to make it easy to share your memories.

Send flowers to the Castle family.