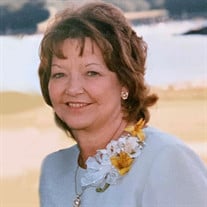 Judy Lynn (Lewis) Pullem, 68, passed away on Sunday, March 1, 2020, at UK Medical Center from complications relating to five year battle with cancer. In hospice care for just a few days, she died peacefully, surrounded by her immediate family. She leaves behind her husband of 44 years, Timothy Lee Pullem, son Chris Pullem of Ashland, KY, son Aaron Pullem of Indianapolis, IN, sister Sharon Bocook (Randy), brother Mervin Lewis (Libby), brother Garry Lewis (Cheryl, deceased), grandchildren Jordana and Caroline, and many beloved cousins, nieces, and nephews. Born March 19, 1951, in Ashland, Kentucky, she was the daughter of the late Onyx Lewis and Lola (Brown) Lewis. She was a life long resident of Ashland, growing up on Gartrell Avenue, right next door to her aunt & uncle, the late Bess and Joe Craycraft, and their daughter, her cousin, Kim (Craycraft) Stambaugh.  Following the death of Judy's father just before she turned eight, the two families strengthened their bond and, by doing so, established a legacy of love that shaped Judy for the rest of her life. Long known for her positive outlook and sense of humor, Judy enjoyed life, family members, and many friends. After attending Coles Junior High School and then graduating from Paul G. Blazer High School in 1969, she began a career in the loan department at Third National Bank before marrying Tim in 1976. In the years that followed, she and Tim created a most wonderful life, raising their two fine sons, spending time with extended family, and experiencing life to its fullest with their large and boisterous group of dear friends. Judy retired from the bank (by this time known as PNC) in 2005, after her grandchildren were born, which allowed her to fully embrace her new role as their Nana. In the spirit of love she learned on Gartrell Hill, she cherished her two small granddaughters and continued to brighten their lives on a daily basis, in ways large and small, as they grew to their teenage years. Judy requested to be cremated. The family will receive friends on Saturday, March 7, 2020, from 11 am to 1 pm, at Miller Funeral Home. In lieu of flowers, donations can be made to Build Ashland, 2746 Pleasant Ave, Ashland, KY 41102, or buildashland.org

Judy Lynn (Lewis) Pullem, 68, passed away on Sunday, March 1, 2020, at UK Medical Center from complications relating to five year battle with cancer. In hospice care for just a few days, she died peacefully, surrounded by her immediate family. She... View Obituary & Service Information

The family of Judy Lynn Pullem created this Life Tributes page to make it easy to share your memories.

Send flowers to the Pullem family.