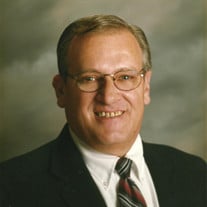 John W. Jenkins, 71, of Ashland passed away peacefully surrounded by loving family on Sunday April 3, 2016 at Community Hospice Care Center. He was born March 22, 1945 in Frankfort, KY the son of the late Admiral Dewey and Beulah Whisman Jenkins. He was the Director of People Helping People Inc. and also served as Treasurer and CFO on the Board of Directors. He was of the Christian Faith, a member of the Fred M. Gross Masonic Lodge #953 and Ashland Elks Lodge BPOE 350. He was also the former owner of Big John’s General Store in Westwood, former owner of Gate City Wholesale in Coalton, KY and emcee of The Coalton Country Jubilee Country Music Show. John was co-founder of People Helping People (PHP) along with his long-time friend, Leon Tackett. Together, they created a non-profit organization that has helped thousands of families and organizations since its inception in 1988. PHP’s primary source for raising funds is its Thursday and Friday evening bingo games in Coalton, Kentucky. The funds provide financial assistance to area residents. John helped create the charitable organization that will continue as a legacy to his hard work and dedication. He lived each day on Earth like the beautiful gift it was, and he never took one breath for granted. He was a loving man who had a generous heart of gold, an incredible smile, and an amazing sense of humor. He enjoyed classic country music and over the years attended several live shows at the Grand Ole Opry. In his lifetime, he held several occupations and wore many hats including auctioneering, business owner, flea marketing, truck driver, and many more. He was one of the region’s most popular bingo callers at numerous bingo games throughout Boyd County. John loved the Lord with all his heart. He was a loving husband, a wonderful and proud father, and he loved his family so much. In addition to his parents, he was also preceded in death by four brothers, Dewey Jenkins, David Jenkins, Tom Jenkins and Sam Jenkins; one half brother, James Jenkins; and special father figure, Leon Tackett. He is survived by his wife, Sharon Caskey of Ashland; one daughter, Kim Jenkins-McClements (Steve) of Ashland; one sister, Mary Jane Adams (Bill) of Ashland; two brothers, Stanley Jenkins (Janie) of Ironville, KY and Frank Jenkins (Rita) of Ashland; and many nieces and nephews. Funeral services will be held 12:00 PM Friday April 8, 2016 at Miller Funeral Home with Rev. Mark A. Kloha officiating. Masonic Services will be conducted by the Fred M. Gross Masonic Lodge #953. Burial will follow in Dixon Cemetery. A memorial reception will be held at The People Helping People Bingo Hall following the funeral service. The family will receive friends from 12:00 PM until 2:00 PM Thursday at the funeral home. In lieu of flowers donation may also be made to Community Hospice @ 1480 Carter Ave. Ashland, KY 41101 or The Ashland Salvation Army @ P.O. Box 1405 Ashland, KY 41105-1405.

The family of John W. Jenkins created this Life Tributes page to make it easy to share your memories.

Send flowers to the Jenkins family.