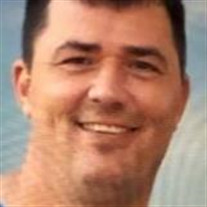 Jason Scott Jacobs, 40, of Ashland, Kentucky passed away October 23, 2021 due to a sudden illness. Jason was born February 28, 1981 in Ashland to William Ellis (Jenifer) Jacobs and Robin Centers Henderson (Bill). Jason was a construction worker. In addition to his parents he is survived by his grandmothers, Goldie Capps of Summit and Jenny Jacobs of Ashland, his wife Morgan Conley Jacobs of Grayson, one son, Jaymas Jacobs of Greenup, one daughter Jaycie Ray and step daughter Brooklyn, a brother, Josh Jacobs of Daphne, Alabama, a brother, James Henderson Jr. of Zanesville, Oh., three sisters, Melissa Jacobs Cook of Summit, Rebecca Lance of Ashland, Nikki Barker of Ashland, and many nieces, nephews, cousins, and friends. Funeral services for Jason will be held 1:00 PM Wednesday, October 27, 2021 at Miller Funeral Home with Pastor James Webster officiating. Visitation will be held from 11:00 AM to 1:00 PM Wednesday at the funeral home. Burial will follow services in Ashland Cemetery. Condolences may be offered at www.mfhfuneralhome.com. Arrangements are under the direction of Miller Funeral Home in Ashland.

The family of Jason Scott Jacobs created this Life Tributes page to make it easy to share your memories.

Send flowers to the Jacobs family.