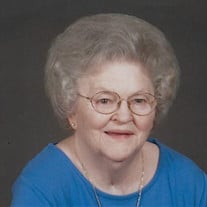 Janice Aleta Ryan, 80, of Ashland, went to be with the Lord, Monday November 6, 2017 at Community Hospice. She was born May 30, 1937 in Ashland, the daughter of the late McKinley and Rena Hensley Hall. She was a member of the South Ashland Methodist... View Obituary & Service Information

The family of Janice Aleta Ryan created this Life Tributes page to make it easy to share your memories.

Send flowers to the Ryan family.