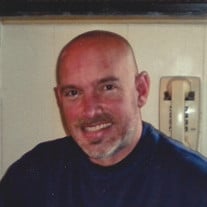 James Patrick “Pat” Skaggs, 48, of Ashland died Monday February 22, 2016 in Houston, TX. He was born August 2, 1967 in Ashland, KY the son of Sherry L. Johnson Pyle of Ashland, KY the late James L. Skaggs. He was an auto repair technician, member of Brent Baptist Church in Alabama, member of the Ashland Moose Lodge and a former Navy Corpsman. In addition to his father, he was also preceded in death by maternal grandfather, L.G. Johnson; paternal grandparents, James Orville and Lorraine Tilson Skaggs; aunt, Shirley Johnson and uncle, Jimmy Johnson. In addition to his mother, he is also survived by one son, James Dilan Skaggs of Brookwood, AL; one daughter, Amanda Gambrill of Mobile, AL; maternal grandmother, Mildred Johnson of Ashland, KY; one brother, Steve Skaggs of Tuscaloosa, AL. and one niece, Kelly Skaggs of Centerville, AL. Funeral services will be conducted 2:00 PM Sunday February 28, 2016 at Miller Funeral Home with Chaplain Jimm Smedley officiating. Burial will follow in Rose Hill Burial Park. The family will receive friends from 12:30 PM until service time at the funeral home. In lieu of flowers, donations may be made to Pat’s favorite charity which is, Supporting Single Moms. Pallbearers will be: Steve Skaggs, Harry “Screech” Nelson, Dilan Skaggs, Alex Coker, Vance Conley and Tony Grossl. Serving as honorary pallbearesr will be, Kelly Skaggs and closest friend and forever “brother”, Mike Jones. “Life is not a journey to the grave with the intension of arriving safely in a pretty and well preserved body, but rather to slide in broadside, thoroughly used up, totally worn out and loudly proclaiming. WOW! What a ride!” Pat slid in the 22nd of February to the arms of Jesus.

The family of James Patrick "Pat" Skaggs created this Life Tributes page to make it easy to share your memories.

Send flowers to the Skaggs family.