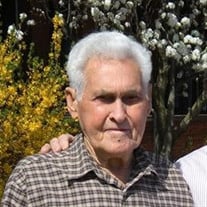 Hubert Spencer, 92 of Catlettsburg, went to be with the Lord Saturday August 23, 2014 at Oakmont Manor Nursing Home. He was born June 20, 1922 in Breathitt, KY the son of the late Isaac and Bertha Ellen Benton Spencer. He was a retired section... View Obituary & Service Information

The family of Hubert Spencer created this Life Tributes page to make it easy to share your memories.

Hubert Spencer, 92 of Catlettsburg, went to be with the Lord...

Send flowers to the Spencer family.