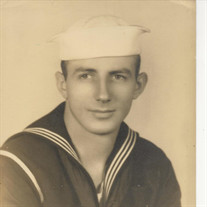 Herbert Beecher Alban, 102, of Ashland passed away, December 25, 2020 at his residence, in Ashland. He was born April 13, 1918 in Columbus, Ohio the son of the late Herbert Beecher Alban and Sarah Whitt Alban. He was also preceded in death by his wife of 74 years, Alene Boggs Alban; four brothers, David, Russell, Jack and Matere; a baby sister and his daughter, Jane Anne Alban. He is survived by sons, David (Gelske) and John (Shelly) of Florida; nieces, Cheryl L. Hankins and Diane Hanaway of Michigan, Tuesday Cain and nephew, Eric Alban, six grandchildren, eight great grandchildren, four great great grandchildren and numerous great nieces and nephews. He is also survived by many special friends including, Tammy Forsyth (John), the Barry and Dena Newsom family, Verna Newman, Herb Conley, Leon and Bonnie Hart, Mark Swift, Dr. Tim and Karen Hart, Tim Pullem, Debbie Gardner and any and all Buckeye and Tomcat Fans. He served in the Navy during WWII in the Pacific, on the Cruiser Guam. He was a devout Ohio State Buckeye fan all his life. When he was 12 years old, he would sell OSU football programs and newspapers outside the stadium. When sold out, they would let him watch the games in a standing area. He was also a hard core Ashland Tomcat fan. He was given the Honor of being named “Mr. Tomcat” at Ashland High School in 2014. He signed a professional baseball contract with the St. Louis Cardinals as a catcher, out of West High School in Columbus, Ohio in 1935 and played in that organization until he enlisted in the Navy in WWII. Not long after the war, he came to Ashland for a job opportunity. He was a fun and interesting man and he will be missed. “Go Buckeyes.” There will be no services scheduled at this time. Arrangements are under the direction of Miller Funeral Home.

Herbert Beecher Alban, 102, of Ashland passed away, December 25, 2020 at his residence, in Ashland. He was born April 13, 1918 in Columbus, Ohio the son of the late Herbert Beecher Alban and Sarah Whitt Alban. He was also preceded in death by... View Obituary & Service Information

The family of Herbert B. Alban Jr. created this Life Tributes page to make it easy to share your memories.

Send flowers to the Alban family.