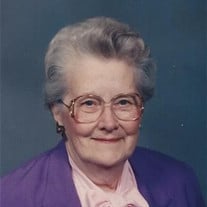 Harriett F. Lumbard, 93, of Ashland died Friday May 9, 2014 at Woodland Oaks Healthcare Center. She was born January 31, 1921 in Spratt, OH the daughter of the late John Alvin and Mary Melissa Humphrey Few. She was a former manager for Woolworth Store in Cleveland, OH during WWII and a graduate of Lash High School in Zanesville, OH. She moved to Ashland in 1946 and helped start the Meals on Wheels Program at King’s Daughters’ in February 1974 and at Our lady of Bellefonte in October 1976. She was a member and the organist at Normal Presbyterian Church and she was a Kentucky Colonel. After her husband Paul passed away, she began working for the Boyd County Chapter of the American Red Cross focusing on planning and organization of the Blood Mobile in the area. She was the Executive secretary for the Boyd Co. Chapter of the American Red Cross and received the Clara Barton Award. She was also an amateur radio operator with call letters WA4AXN. In addition to her parents, she was also preceded in death by her husband, Paul B. Lumbard, a daughter, Paula Faye Mullins; two sisters, Beulah Larue Bunting and Charilla Josephine Lutz; and two grandchildren, Ronald Glenn Mullins and Jason Dwight Reynolds. She is survived by two daughters, Mary Elizabeth Keely (Bob) of Scott Depot, WV and Sue Ann Reynolds of Cincinnati, OH; eight grandchildren, Mark Edward D’Alessandro, Matthew Alan D’Alessandro, John Barton D’Alessandro, Lori Sue Mullins-Hayes, Alicia Faye Mullins, Tracie Ann Williams, Griffan George McKinney, and Libbia Sue McKinney; and eleven great grandchildren. Funeral services will be conducted 1:00 PM Tuesday May 13, 2014 at Miller Funeral Home with Chaplain Mike Greene officiating. Burial will follow in Rose Hill Burial Park. The family will receive friends from 11:00 AM until service time Tuesday at the funeral home. In lieu of flowers, donations may be made to Normal Presbyterian Church @ 4316 Winchester Ave. Ashland, KY 41101 or The American Red Cross @ 4201 Blackburn Ave. Ashland, KY 41101.

Harriett F. Lumbard, 93, of Ashland died Friday May 9, 2014 at Woodland Oaks Healthcare Center. She was born January 31, 1921 in Spratt, OH the daughter of the late John Alvin and Mary Melissa Humphrey Few. She was a former manager for Woolworth... View Obituary & Service Information

The family of Harriett F. Lumbard created this Life Tributes page to make it easy to share your memories.

Send flowers to the Lumbard family.