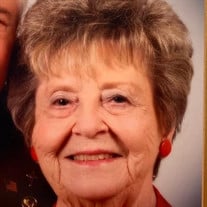 On January 26, 2019, Garnet Evelyn Maupin Bishop, loving wife of John G. Bishop, passed away at the age of 80. Garnet was born on April 3, 1938 in Ashland, KY and preceded in death by her parents Frank B. and Irene (Tiny Oney) Maupin. Garnet and John have two children. John F. (Jan) Bishop of Blaine, TN and Sarah (Chris) Thompson of Clinton Twp., MI. She has two sisters, Madge Maupin (Phillip) Haney of Ashland, KY and Janet Maupin of San Francisco, CA, and proceeded in death by one brother, Thomas Maupin. They also have 4 grandchildren (Cory, Joseph, Owen and Charlotte) and they have 3 great-grandchildren (Abigail, Cory, and Athena). This group of children and grands are the highlight of their lives. Over the years they loved nothing more than to spend time with each one of them or attend activities that they were involved in while their health has allowed them. Garnet married John on July 28, 1955 in a humble apartment. Their 63 years of marriage have been a blessing to so many who know them. While John served in the Army in Korea, Garnet completed her high school senior year and graduated from Ashland High School. They moved around the United States while John was stationed in various places in the Army. They migrated to Pontiac, MI and resided there for the past 54 years. Garnet was a woman of great faith in Jesus. She has been a Sunday school and vacation Bible school teacher over the years. She’s ministered to countless people in her home or outside of her home. Others knew how loving she was because of her faith. She was greatly loved and will be terribly missed here on this earth but is with her mother and father and brother, aunts and uncles, cousins and friends, waiting for the rest of us to join the happy reunion someday. Funeral services will be conducted 1:00 PM Friday February 1, 2019 at Miller Funeral Home with Rev. Dr. Brent Hutchinson officiating. Burial will follow in Ashland Cemetery. The family will receive friends from 12:00 PM until service time Friday at the funeral home.

On January 26, 2019, Garnet Evelyn Maupin Bishop, loving wife of John G. Bishop, passed away at the age of 80. Garnet was born on April 3, 1938 in Ashland, KY and preceded in death by her parents Frank B. and Irene (Tiny Oney) Maupin. Garnet... View Obituary & Service Information

The family of Garnet Evelyn Bishop created this Life Tributes page to make it easy to share your memories.

Send flowers to the Bishop family.