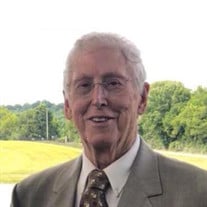 Frank Rolen Jr., 90, of Ashland, Kentucky, passed away Friday, November 27, 2020 of a short illness in Kings Daughters Medical Center. Frank was born September 1, 1930 in Ashland to the late Frank Sr. and Alice Louise Mullins Rolen. In addition to his parents, Frank was preceded in death by his sister, Jacqueline Campbell. Frank was a member and Deacon Emeritus at Unity Baptist Church, a US Navy Korean War Veteran, retired from Summit Federal Correctional Institute as a Counselor, an avid golfer for over 50 years, and traveled to many foreign countries. Frank was well known for being a little league baseball coach and Babe Ruth coach for numerous years. Frank is survived by his wife of 66 years Ella Mae Clay Rolen of Ashland, his sons, Mike (Samantha) Rolen of League City, Tx., Steve (Sue) Rolen of Franklin, Tn., and a daughter, Marla Rolen and her husband William Carter of Tampa, Fl. In addition to his wife and children, he is survived by his sisters, Jean Venters and Aileen “Mickey” Rolen both of Bellefonte and his grandchildren, Stewart Rolen, Hannah Eskola, Sarah Rolen, and Natalie Rolen. Frank’s words were “I was blessed by God to have such a wonderful wife and family and so many loyal friends”. A private visitation and funeral service will be held on Friday, December 4, 2020 at Unity Baptist Church with Dr. Jeremy Couture and Brother Jimm Smedley officiating. Burial will follow services in Golden Oaks Memorial Gardens. Military Rites will be performed by Ceredo/Kenova America Legion Post 93. Arrangements are under the direction of Miller Funeral Home in Ashland. In lieu of flowers contributions may be made to Unity Baptist Church in Frank’s name. Condolences may be offered at mfhfuneralhome.com

The family of Frank Rolen Jr created this Life Tributes page to make it easy to share your memories.

Send flowers to the Rolen family.