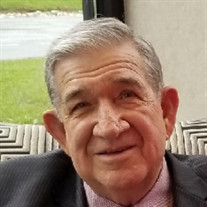 Clyde Allen Pack, 77, of Catlettsburg, entered heaven on Saturday, January 19, 2019, at home, with his wife and daughters by his side. Mr. Pack was born on June 24, 1941, in Ashland, KY, to the late Ishmael Nelson and Clara Mae (Bradford) Pack. Clyde graduated from Chaffey High School, Ontario, CA, in 1959. He enlisted in the United States Navy for three years, serving as a radar man on planes that monitored the Pacific Ocean coastline, specifically looking for Soviet subs during the Cold War. He then married his childhood sweetheart Carol Dianne Burge of Upland, CA, with whom he had two daughters. Clyde also graduated from Chaffey Community College and worked for Southern California Edison until moving back home to KY in 1972. Clyde retired from Kentucky Power. He was an active member of New Life Church, Huntington, WV, where he was an elder for over 20 years. He was known as one who demonstrated the hallmarks of kindness, love, excellence, loyalty, generosity, and faithfulness. To his family he was a true protector. Clyde was an encourager to all those he met and was known for his wisdom and problem solving skills. Some have spoken of his ability to make you feel like you were the most important person in the world. He was a man who took no notice of where you were born, the color of your skin, the money in your bank account, or your position in life. He was the same no matter the day, the time, or the place. Many folks have simply said that he was "one of a kind"! He loved Jesus above all and always took the opportunity to talk about the goodness of God and everyone's need of The Savior. Clyde will be greatly missed by Carol, his wife of 56 years, his daughter Melanie Dianne Jarrell and her husband Scott, his daughter Stephanie Adele Pack, and his beloved twin grandchildren Remington Scott and Brittany Morgan Jarrell. He is also survived by his two sisters Bonnie Joyce Thom of Ashland, KY, and Wilma Jean Anderson of Rancho Cucamonga, CA, sister-in-law Sharon Pack of Ontario, CA, as well as a host of nephews, nieces, cousins, and other family members who will also feel his loss. In addition to Clyde's parents, he was preceded in death by his in-laws Talmadge Clarence "TC" and Alberta Janet "Birdie" (Derby) Burge, brothers Col. Ishmael Nelson Pack, Jr. and Charles Bradford Pack and their wives, brother Curtis Paul Pack, and his brothers-in-law. Funeral services will be held 12:00 PM Thursday January 24, 2019 at New Life Church, 1101 Cedar Crest Drive of Huntington, WV by Dr. Darrell Huffman officiating. The burial will follow at the Kentucky Veterans Cemetery Northeast, 100 Veterans Memorial Drive, Grayson, KY. with military services conducted by the Kenova American Legion Post 93. The family will receive friends from 11:00 AM till 12:00 PM Thursday at the church. Arrangements are under the directions of Miller Funeral Home. In lieu of flowers, donations may be made to Unison Harvest (missionaries Cliff and Christie Graham), one of the organizations Clyde supported, at P.O. Box 818, Malibu, CA 90265 or unisonharvest.com.

Clyde Allen Pack, 77, of Catlettsburg, entered heaven on Saturday, January 19, 2019, at home, with his wife and daughters by his side. Mr. Pack was born on June 24, 1941, in Ashland, KY, to the late Ishmael Nelson and Clara Mae (Bradford) Pack.... View Obituary & Service Information

The family of Clyde Allen Pack created this Life Tributes page to make it easy to share your memories.

Send flowers to the Pack family.