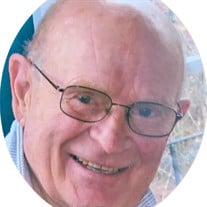 Cecil Everett Fannin Jr., 81, of Ashland, KY passed away peacefully surrounded by family September 10th, 2016. Born January 18th, 1935, he was the son of the late Ethel A. Fannin and CE Fannin. He was preceded in death by sisters Mary Alice Clemmons, Zelma Garvey, Freda Anderson, and brother David Allen Fannin. Cecil graduated from Kentucky Military Institute in May, 1952 and attended The University of Kentucky. He then enlisted in the Army where he served in the signal corps. He earned his Bachelor of Science degree in math and physics from Eastern Kentucky University in 1962. Cecil was married June 1962 to Judith Ann Harrison, daughter of Nancy and Joe Harrison on Signal Mountain, TN. Cecil managed the Blue Ribbon Bowling Lanes, where he taught hundreds of people to bowl and used his engaging personality to create leagues and promote bowling. In 1966, Cecil and Judy obtained the franchise to open their first Kentucky Fried Chicken store on 13th street. Over the next 30+ years, they owned and operated over 15 stores throughout Kentucky, Ohio, and West Virginia. Cecil loved all aspects of entrepreneurism, especially working with the many employees of his KFC family who all respected his goal of making the Colonel proud! Cecil was generous and dedicated to his family and enjoyed many trips to Florida and out West. He was a true blue UK fan and hosted many events with family and friends. Travelling was a real passion of his. He and Judy rode elephants and camels, visited cathedrals and museums, wined and dined, and met new friends at every port. He listened to jazz, watched classic movies, worked on the farm, walked fast around Ashland, and threw a great party! Cecil is survived by his wife Judy Fannin of Ashland, his children Nancy Williams(Marc) of Huntington, West Virginia, sons Cecil Fannin III (Missy) of Ashland, Mike Fannin of Greensboro, NC, and Scott Fannin (Angie) of Carrollton, GA; 10 grandchildren, Ben Williams, Alex Spiegelberg, Caroline Fannin, Connor Fannin, Claire Fannin, Jack Fannin, Coleman Fannin, Olivia Fannin, Nick Fannin, Wyatt Williams,sisters, Virginia Allene Rose and Georgia Fannin Watson (Bill), several nieces and nephews, dedicated caregiver Debbie Barnhart, and many friends. Cecil was adored by all. Visitation for family and friends will be on Tuesday, September 13 from 11am-1pm at First Christian Church of Ashland. The funeral service will follow at 1pm with a celebration of life by Rev. Dr. Isaac “Ike” Nicholson. Interment will be at Rose Hill Cemetery. In lieu of flowers, you may honor Cecil's memory with a donation to First Christian Church 1930 Winchester Ave. Ashland, KY 41101or Highlands Museum and Discovery Center 1620 Winchester Ave. Ashland, KY 41101.

Cecil Everett Fannin Jr., 81, of Ashland, KY passed away peacefully surrounded by family September 10th, 2016. Born January 18th, 1935, he was the son of the late Ethel A. Fannin and CE Fannin. He was preceded in death by sisters Mary Alice... View Obituary & Service Information

The family of Cecil E. Fannin, Jr. created this Life Tributes page to make it easy to share your memories.