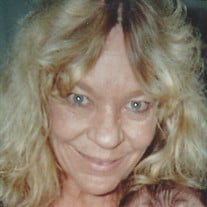 Cathy Marie Endicott, 61, of Ashland died Sunday June, 21, 2015 at Hospice Care Center. She was born July 1, 1953 in Huntington, WV the daughter of the late Doug and Ethel Lillian Newland Manning. She was a former employee of Smithfield Packing... View Obituary & Service Information

The family of Cathy Marie Endicott created this Life Tributes page to make it easy to share your memories.

Send flowers to the Endicott family.